Almost a year back around January 2015, an eye-popping headline on Times of India, grabbed my attention. The article suggested that as many as 44% of suggested surgeries were unnecessary. As much as I recall, this article trended for a couple of days as the most shared and commented, which I am sure would have given much-needed satisfaction to its writer and publisher. It also invited the most vitriolic comments for the medical community and defenses from few brave-hearts who felt that the figures were simply unrealistic. Those comments are no longer visible, but here is a link to the published article.

Apparently, it was based on an in-house research project by an organization that even today proudly uses it as a statistic on its website.

I am not aware if this research ever made it to any of the medical journals that would have readily lapped on to such findings, or was endorsed by any professional organization. That makes the research highly suspect. Read below about some of the tell-tale signs of bogus studies!

Second opinion has a valuable place in ensuring the most optimal outcomes for both the patient as well as the society as a whole. However, promoting the practice of second-opinion by demonizing the medical community and by creating a false fear in patient’s mind is equally unethical as may be conducting an unnecessary surgery. It is true that a few bad apples exist even in the medical community, just like they do in almost any other job or profession but such propaganda is a great disservice to all.

Therefore, the one place such research and tabloid news belongs to is: 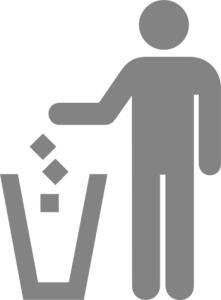 Now, let’s talk about some of the right reasons for getting a second opinion.

As experienced surgeons would agree, a surgeon’s job is to evaluate medical evidence and risk factors that can be unique to a patient, before advising for or against surgery. It is a decision that is based on weighing the potential benefits against the likely risks. As can be expected in a complex decision, each expert may give a different weight to different factors. This can be because of the clinical experience a surgeon has, prior case types he or she has successfully handled, or even sometimes due to personality differences. A more confident and action oriented surgeon may recommend surgery because he or she perceives lesser risks but more benefits while another surgeon who is more conservative in her approach may suggest to wait and try some other alternatives. Naturally, such difference in opinion is not because the previous Surgeon is dishonest and likes to perform unnecessary surgeries on hapless individuals!

A study that analyzed initial years after the state of Massachusetts enforced the second opinion on all elective surgeries performed under the Medicaid program found that approximately 11.3 percent of elective surgery recommendations were reversed as a result of the second opinion. The second opinions too were reviewed and reversed again in some cases, bringing down the rejected recommendations to only 7.7%. [1] First, this study made it clear that the difference of opinions was not due to any devious intentions but due to honest differences that were based on differing benefits/risks assessments. Secondly, even the second opinions saw some reversal when they were subjected to a third opinion. Ultimately only 7.7% decisions were finally in reversed state after undergoing a second and third opinion process. Several other studies also present the decision reversal rate around this, which makes it much more believable than the staggering 44% unnecessary surgeries figure thrown around earlier.

Given that the more reasonable decision reversal rate is around 10%. Does that imply it is not as useful to obtain a second opinion? The answer is simply NO.  The cost of taking an additional opinion is only marginal when compared to the costs incurred in undergoing any surgery.

Reason 2: Second opinion can help you become confident about your treatment

Getting a second opinion can also help a patient become more relaxed and confident about the treatment approach he or she has been suggested. A study was published from Netherland in 2001, which collected data on 2079 patients who visited an orthopedic surgical outpatient clinic between 1996 and 97. [2] Patients visiting the clinic were asked to self-define as seeking a second opinion if they had visited at least one other surgeon for the same condition within the previous two years. Results indicated that nearly 30% patients were visiting to have a second opinion with primary reasons being a) disappointment with earlier treatment, b) needed more information about their condition and c) didn’t receive enough information on all treatment options possible.

A second opinion can lead to a better patient satisfaction and understanding of the various treatment alternatives.

Reason 3: Getting a second opinion just makes a good medical and economic sense

In the words of the father of modern surgery, John Hunter, surgery is calculated violence on the body and should be considered a last resort. Why? Because any time you decide to go under the knife, no matter how routine or safe the surgery is, there are always some postoperative risks associated with surgery. These risks do not end when you come out alive and fit after a successful surgery. Post-operative infections are not very uncommon, and even the safest surgeries have between 1% to 3% complications rate. Therefore, as long as the surgery benefits do not outweigh all such risks, the best decision is to avoid it.

It also makes a good sense from economic aspects. A knee replacement for instance on average can cost from INR 2 to 2.5 Lakh. Still, a vast majority of Indian population pays for such expenses in an out of the pocket model.

A second opinion should also be sought when the first opinion has ruled out surgery, and not just to delay or avoid surgery. As a matter of fact, medical studies have proven that when a necessary surgery is delayed, it leads to worse medical outcomes. Here’s one of our articles that talk about why one should not delay a hip replacement surgery when it is clear that sooner or later, the patient would have to go through it.

You already know that getting a second opinion benefits you in many other scenarios. Do you just go ahead and buy a house because you are highly impressed with the builder, or do you perform the necessary due-diligence? Don’t you compare different insurance policies even though you trust your current agent? How many times have you made a direct order to purchase without looking at user’s reviews on a product?

No doubt that a patient and doctor relationship is based on trust, but the best outcomes are generated when “trust” is replaced with “trust but verify”.

Now you have three good reasons why one must consider getting a second opinion, especially when the treatment involves surgery, a major change in the treatment plan for a chronic disease or when a new treatment approach is suggested. You should get a second opinion even when you have the utmost trust in your doctor because getting a second opinion does not imply any insult to your primary doctor’s intellect. On the contrary, it implies that you respect the challenges of decision making in his or her profession and feel that getting your case reviewed by an extra eye will help you both.

Feel free to ask us for any help or information here!

Second Opinion - Promoting it the right way!
4.0 rating based on 12,345 ratings
Overall rating: 4 out of 5 based on 1 reviews.
Anonymous

Second Opinion – Promoting it the right way!
Friday, October 30, 2020
★★★★☆
“ Hello, The information is good and it is very important to take the second opinion to maintain good health”
- Abishek
Note: Information available on healthclues.net is solely for awareness purposes on matters related to health and fitness and is not a substitute for consultation with a licensed medical practitioner.